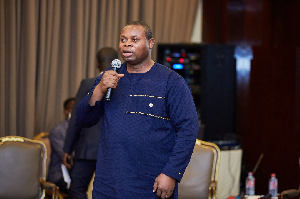 IMANI Africa’s Founding President and CEO, Franklin Cudjoe, has asked for the current 1.5% rate on Electronic Transfer levy popularly known as E-levy to be reduced to 0.5%. Franklin Cudjoe discusses how revenue increases when CST rates are lowered.

According to him, this will have an impact on increasing tax revenues.

Leading member of the New Patriotic Party, Gabby Otchere-Darko, said in a series of tweets on Monday (June 27) that e-taxes accounted for only 10% of expected revenue.

“After 5 months of deadlock and attacks, post-implementation e-levy only generated 10% of expected revenue; it remains very low compared to the rest of the world; “public debt is very high and the cedi is depreciating at an alarming rate against the US dollar like most currencies,” Gabby Asare Otchere-Darko wrote on Twitter.

In response to the tweet, Franklin Cudjoe mentioned that there is ample evidence that a 4% cut in the Communications Services Tax (CST) during its inception led to an increase in government revenues.

Therefore, he suggested that the government implement the same strategy regarding e-tax.

The government believes that tax action is necessary to close the income gap and address revenue mobilization and governance of the country’s economy, although many have criticized it as regressive and will direct progress towards a cashless economy.

After a five-month stalemate in parliament, it was passed at the end of March 2022. However, the projected tax revenues for the 2022 fiscal year will have to be revised from GH 6.9 billion to GH 4.9 billion.

Former President of Burkina Faso Returns After Years in Exile

Pay Attention to the People who care

I will destroy your saboteur this season

The Lord is on the Move